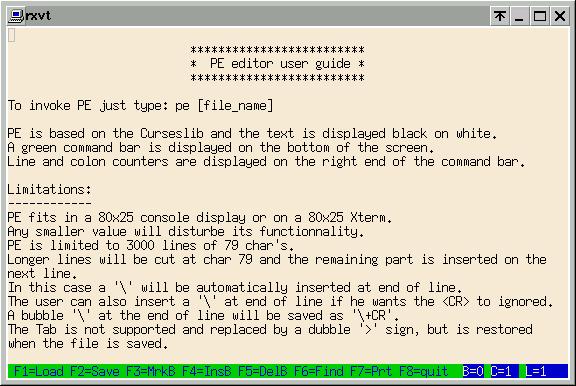 PE fits in a minimum 80 chars width console display or Xterm.
PE is limited to 8000 lines of 255 chars. Longer lines will be cut and the remaining part is inserted on the next line.
In this case a '\' will be automatically inserted at end of line.
The user can also insert a '\' at end of line if he wants the <CR> to be ignored at save time.
A double '\' at the end of line will be saved as '\+CR'.
The Tab is now supported (v0.5), the size is based on the terminal one.
NO Undo available !!!
F1 is removed as usually conflicts with the help of many terminals in X.

F2 saves the buffer to the same file or any other one the user can specify.

F3 marks block of lines (max. 1000)
The marking status is displayed on the right of the screen B=X.
Pressing the first time marks the first block line, B=1, a second time will mark the last one, B=2
the third strike will unmark the block, B=0.

F4 inserts the block under the current line position. It can be repeated. Blocks are kept in memory as long as B=2.

F5 deletes the block but will loose its effect if any insertion is made.
If you want to move a block: first mark it, then delete it and finally insert it at its new position.

F6 is the search facility.

F7 sends the buffer to a script 'pe-prt' you should create to fit your system.

F8 quits the editor. No warning to save modified files is provided.

F9 loads a file, the name should be entered after pressing this key.  It's not possible to load more than one file.
A backup copy of the loaded file is automatically done.

F10 (not displayed) put the cursor at the end of text.

If you see no cursor on X terminals, please modify the cursor color with the -cr [color] switch when invoking Xterm or rxvt


Download the sources
A binary file is included compiled on Debian 7 in i386 env..